Posted on March 24, 2017 by winnipegrc | Comments Off on PETER NYKOLUK ROWING SCHOLARSHIP PRESENTED TO WRC MEMBERS 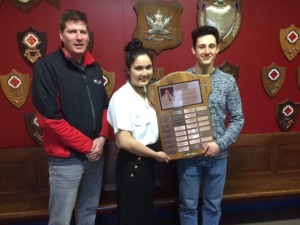 Two athletes from the Winnipeg Rowing Club, Hanika Nakagawa and Andrej Kao were selected as co-recipients of thePeter Nykoluk Rowing Scholarship, and will share the $6600 award.

The Peter Nykoluk Rowing Scholarship was established in cooperation with the Manitoba Rowing Association, Winnipeg Rowing Club (WRC), and University of Manitoba Financial Aid and Awards. The Nomination Committee was led by Chairperson Jeff Powell, with committee members Karen Styrchak (first recipient of the scholarship in 1995) andBrandi Smith.

The Peter Nykoluk Rowing Scholarship has been handed out annually since 1995. Each recipient has distinguished themselves with notable accomplishments in and dedication to rowing. They have also met the other essential criteria in terms of educational aspirations, sound personal traits, contributions to the development of the sport, and leadership qualities.

Hanika Nakagawa is in her third year of study at the University of Manitoba in the Nutritional Sciences Program. She maintains an impressive academic achievement (GPA 3.8) while being involved in all aspects of the sport of rowing.

Hanika is an accomplished athlete having trained and competed at the provincial and national levels in water polo and rowing. In 2013 following a water polo injury, she pursued rowing as her sport of choice. She competed at Western Canada Summer Games (2011), North West International Regatta (2011-2016), Canada Summer Games (2013), Royal Canadian Henley (2014) and Women’s Henley in England (2016).

Hanika spends much time volunteering at the Winnipeg Rowing club. This past year she took on the role of Club Manager, aiding in the day-to-day administration of the club. She completed the Rowing Canada coaching program, and has gained accreditation as an Associate Umpire at rowing regattas. Hanika served as Junior Athlete Representative on the WRC board of directors. Her coaches have lauded her dedication and commitment to the sport, and she is a terrific asset to rowing in Manitoba.

Andrej Kao is enrolled in the Faculty of Engineering at the University of Manitoba. He began rowing in the summer of 2013, and won silver in the Junior Men’s Quad at the North West International Regatta, gold at the Western Canada Sprints, and competed at the 2016 Canadian Henley. He is currently training for the Canada Summer Games, which take place this summer in Winnipeg (with rowing events in Kenora).

Andrej obtained his coaching qualification and has since coached various rowing crews in the learn-to-row program, for youth summer camps, and for introductory clinics. He has been actively involved in boat/equipment maintenance and repairs as well as regatta preparation.

A former rowing coach describes Andrej as an individual who strives to excel at everything he does. He never fails to show initiative, leadership, compassion and respect – the very qualities that the Peter Nykoluk Rowing Scholarship stands for.

The Peter Nykoluk Rowing Scholarship was started in 1995 to recognize individuals whose outstanding contributions to and achievements in the sport of rowing parallel the values of Peter Nykoluk.

Peter was a competitive rower who proudly represented the Winnipeg Rowing Club at regattas, and supported his club and colleagues in many ways. Peter died in 1990 as he came to the rescue of his teammates who were involved in an accident that occurred when the University of Manitoba crew was travelling to a regatta in Minneapolis.

Peter was a unique individual whose enthusiasm for life was evident in everything that he undertook. He had an endless capacity for learning, and the dedication, perseverance and optimism he consistently displayed were contagious to all who had the pleasure of knowing him.

A rowing scholarship in Peter’s memory was established to recognize individuals whose outstanding contribution to and/or achievements in the sport of rowing closely parallel the values of determination, commitment and sportsmanship consistently displayed by Peter. The award has been administered annually since 1995, to financially assist athletes to pursue their education while participating in the sport of rowing. It was initiated by Peter’s father, Jim Nykoluk, to honour Peter’s memory, while ensuring the future of the sport that Peter loved.

In addition to the scholarship, Peter’s memory lives on in Peter’s Garden, which comes to life each summer on the grounds at the Winnipeg Rowing Club on Lyndale Drive. As well, the Nykoluk Memorial Trophy is presented annually to the fastest women’s senior pair at the North West International Rowing Association (NWIRA) Championship Regatta.

This entry was posted in Announcement. Bookmark the permalink.