Posted on August 19, 2014 by rowwrc | Comments Off on WRC Men & Masters Win Overall Titles at NWIRA 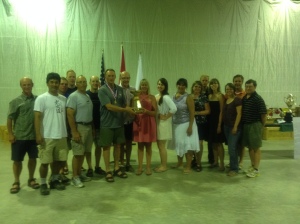 Winnipeg Rowing Club put up a strong battle for the 2014 Lipton Cup at the Northwest International Rowing Association’s Championship Regatta with a mere 8.45 points separating Winnipeg from first place St. Paul in the overall points standing. WRC Men’s crew were awarded the Con Riley Trophy for the second year in a row, which is presented to the club with the most overall points in men’s events. The WRC Masters also took home top honors by earning the most points for all clubs in Masters events.

The 111th annual regatta was held over two days in Kenora, ON on Rabbit Lake. The event had over 500 entries from 13 rowing clubs including Saskatoon, Regina, Winnipeg, Kenora, Thunder Bay, St. Paul, Minneapolis, Duluth, Rochester, Michigan and Long Lake.

This entry was posted in Uncategorized. Bookmark the permalink.